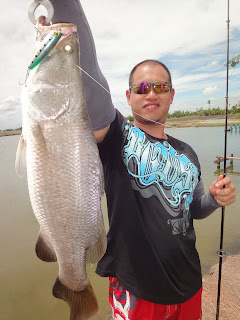 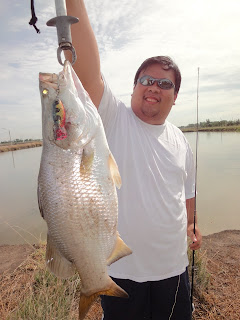 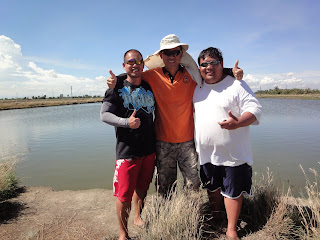 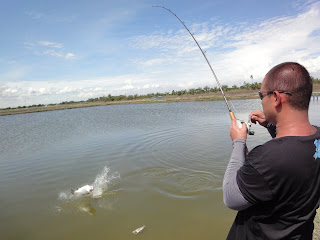 Despite all the unrest and political turmoil that Thailand was facing, me and MR AT headed down to Thailand for our share of fishing.
We bought tickets way before all the troubles started and was deciding between postponing the trip or simply just BOCHUP..
I guess the decision to bochup proved to be fruitful. There was no sign of any trouble at all. The good thing though, was that there was
no other customers of any other guides that were there! We had the whole place to ourselves, regardless of it was BSR or Boon Mah.
Day before the trip, the protests ended. The only problem was the curfew which was still
on but ended a day later. Afterall, we were there for fishing and not anything else.......not this time...

Surprisingly it was a lot more peaceful due to the lack of tourist..we sorta expected that...
It was my first time meeting and fishing with John, as AT was the one liasing with him for the trip. He was already waiting at the hotel by the time we arrived.
I was amazed by his honesty and forthrightness, as he told us the pros and cons of doing each place that we were going. We had not decided on a fixed
itinerary yet. We came up with a plan eventually and were ready to go.

DAY 1:
We had hit after hit to a total tally of 90 between 2 people. The hits on popper were ridiculous and our lures were totally damaged and lost. I was
laughed at by John when he looked at my tackle...undersized and underpower...but i guess thats the thrill of it isnt it?
The takes were explosive and powerful, I swear even if I hooked and threw a ciggerette butt, the fishes would have just as much gone for it.
For AT, it was his first time luring and now....He has been POISONED.
We moved on for some proper luring much later and a more matured pond...a chance for us to try out all our lures. That went very well, as I had expected
a much lower bite rate. But we were hitting fishes at a very decent rate.
SIBEH SONG.

Day 2:
BSR was a first time for Mr AT and even suggested a 2 day bsr trip....i told him he was freaking crazy....and decided to let him try it out before
he can say anymore.....
AFTER 15 Mekhong Catfishes later.....he told John to stop casting out....with a "please".....
Of course, the highlight was a much awaited MEkhong above 40KGS...and we actually did it....
Mr AT(beginners luck) was fighting a mekhong catfish for a long time, thinking it was a 20kg fish....prob wondering why it took so long to land.
THe fish eventually came back...but we couldnt see it at all as it had never surfaced for the whole duration...only at the end....the fish actually went into the stilts
and tore the line. We thought it was lost but AT noticed the float still running around. John promptly grabbed whole of the other rod and managed to "lure" the float in.
Lo and behold....after a CRAZY 5 min fight...the fish was landed...much to John's excitement...(never saw a fishing guide so excited before in my life)
Objective 1 achieved.
Since AT and Me was not able to raise anymore Mekhongs...we ask John to stop fishing....instead...(my own personal target) to try for the Siamese CARP. We tried for Carp
while John continued torturing AT with MORE MEKHONGS....Luckily I managed to "siam" by pretending to watch the rod for Carp. BoonSong the thai guide told me that the carps were
here as we could observe bubbles....hmmm.....there was a scare from a smallish patin which took the bait....it wasnt too small actually, about 10 KGS....but not what I WANT...
I assumed the carp would have left due to the disturbances....which totally didnt prepare me for the take...probably abt 1hr 30 mins of fishing for it.
The fight was great, fast and aggressive....and i never thought that we would even get it...
John, mr super excited went screaming "PUMP PUMP PUMP" X 10000 and didnt allow me to rest for a second....wow.....
when i netted it...i was...exhausted...with Joy and the adrenaline rush.

Thank you Mr john, it was a perfect day so far...see u tml for the last day of fishing..
Perfect trip so far...great help with everything...we were especially surprised by his honesty and willingness to teach us with regards to anything we might not be aware of. 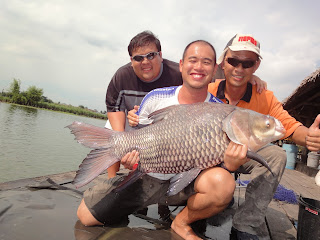 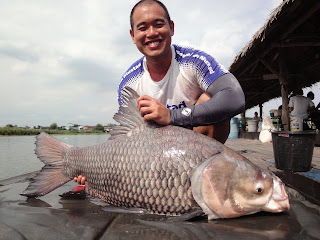 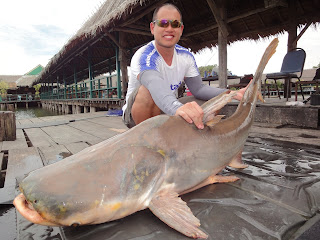 Day 3:
The objective of our trip have been met...therefore we decided to pop back to Boon mah for some last min lure testing....supposedly a relaxing trip turned into a popper casting session. We were assigned a slightly matured pond as we just wanted to rest and do some casting for only the willing fishes...however the weirdest thing happened.
When it started to drizzle...but it continued to be as warm as hell...when the rain stopped and the sun came out for the rest of the whole afternoon...we discovered that the KBLs were near the surface when our minnow plastics refused to be "eaten".
Our poppers started flying out and next thing we knew...it was a popper frenzy...
Our Popping Virgin Mr AT became the KING of Poppers when the fishes kept going back to his unknown popper lure....cast after fast it was hit again and again!....as for me....
I HAD ZERO.....
until i found out his secret...when i used his tackle for awhile....interesting...i decided to test out his technique with my popper and voila!....Wahahaha.....

We got so tired with popping and popping...and hit after hit...that for the last 1 hr we started to lure without hooks...that was fun though...as we had multiple hits on one retrieve.
Me and John started teaching mr genius AT how to use the BC...I have to say...he is a naturally talented angler...will see how deep the poison is when we get back to singapore...
after i help him with buying new tackle....

Great Job John...it was a very good trip....something me and AT really looked forward to despite all the nonsense that had happened recently..months of sitting in front of my office table...FINALLY!
Will get back to you when i head back to BKK...with Mr AT aka. Popper King...and our other kakis...
Well worth my hard earned cash....shit..

Posted by BkkFishingTour BKKGUY at 5:51 AM